Kettlebell training demands both isometric stability of the spine, as well as a good deal of thoracic mobility.  When programming for clients, BSN prioritizes these qualities.

...when someone shows up to train with me and they have proper kettlebell training experience, I'm ecstatic. If they can swing properly, it's quite easy to teach them how to squat, deadlift, and hip thrust properly." - Bret Contreras, CSCS, PhD candidate

As a back injury specialist we design exercise progressions that begin with corrective and therapeutic exercise. Then the remaining sequence follows in 4 stages: stability/mobility, endurance, strength and power. Kettlebells can figure into every stage for the appropriate patient/client and situation." - Dr. Stuart McGill, professor of spine biomechanics at Waterloo University (Waterloo, ON, Canada)

Repetitive ballistic loading of kettlebell swings and other quick lifts appears to be highly beneficial to your joints, provided you do not over do it." (Verkoshansky & Siff 1998, p.50)

The official ethnic sport of Russia, Girevoy Sport uses the same basic lifts as Olympic Weightlifting - namely the snatch, jerk, and clean & jerk combo called a Longcycle.  The key difference between the two sports is that while Olympic lifting is judged by successful completion of a single repetition of maximal weight, Gireviks (Kettlebell lifters) lift a sub maximal weight for max reps, within a 10-minute period.  Men compete with 32kg kettlebells, 24kg for amateurs and over 40s, 16kg for juniors.  Women compete with a 16 or 24kg kettlebell.  In order to successfully endure the entirety of the designated ten minute set athletes require well developed coordination, agility, movement economy techniques, and an indomitable will.

"Explosive strength/ power is the ability to express significant tension in minimal time. It is considered the strength quality most characteristic of athletic activities...Power can be developed with supplemental training of the stretch-shorten cycle, using plyometric muscle actions prior to rapid shortening. Ballistic lifts are very efficient at developing explosive strength" (Sanchez, 2009).

Traditional kettlebell movements train neuromuscular coordination and intramuscular stability over broad ranges of motion.  These two principles of physical training cultivate both good motor-patterning as well as kinesthetic awareness.  If you train to perform a clean Turkish Get-up (TGU) with 1/2 your bodyweight there's not a whole lot you won't be able to accomplish physically; you will be the very definition of a naked warrior.

The TGU challenges three levels of competency or capacity and it will usually expose them in the order they need to be corrected...

Will Kettlebells make me bulky? 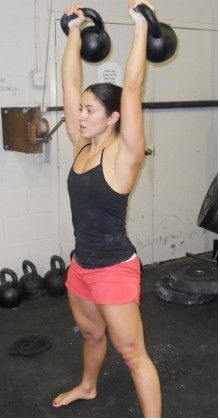 Ballistic kettlebell exercises (such as snatch, jerk, clean and swing) have a short time under tension because the movement is explosive. Each rep lasts a second or less. About three-quarters of the rep is performed mostly by the initial burst, therefore the actual amount of time where the muscles are producing a forceful contraction is around one-third of a second. Not enough to produce hypertrophy (Sanchez, 2009).